At our recent Design and Management of Learning Environments conference, Ian Stickland of Charcoalblue spoke about his work designing and installing auditoriums, not just in learning environments and theatres, but also in workplaces.

Whilst he covered the effects of the digital age in both the design and use of  lecture theatres and presentation spaces, even more interestingly he dwelt too on the why and how of designing spaces that enhance the relationship between the presenter and their audience. So once again the importance of engagement was highlighted as a driving and necessary force in the design of a productive space.

The session also drew on the rich history of theatre, teaching and storytelling spaces to explain the fundamentals of auditorium design.

We don’t usually release our conference videos except to our delegates, but just on this occasion we really wanted to share this with you!

Filmed and edited by our friends at McLeod Audio Visual.

Check out our up-coming 2019 Workplace Trends events in London on 15 October, and Copenhagen on 19 September.

Mike Kelly, Library Space Development Manager at The University of Manchester Library, attended our Design & Management of Learning Environments Conference in London and subsequently published this blog post on the event.
Here’s the first few paragraphs: read the post in full on the University’s Library Services Blog.
“I recently attended the Design and Management of Learning Environments conference, organised by Workplace Trends and sponsored by Herman Miller. After a great journey to Euston Station, made better by a strong coffee and the latest edition of Facilitate Magazine, I was excited to start the day.
I am very familiar with this area of London (Kings Cross, Great Portland Street, Regents Park) but I am always energised by the noise and movement in this vibrant part of the City. As I walked alongside Regents Park, I noticed that the long line of queuing traffic was silent – as if the vehicles were parked. However, on closer inspection, I found that every car was either electric or hybrid (including Teslas, Porches, BMWs). The effect on the surrounding atmosphere was incredible – calm, a feeling of safety and quiet. I presume this move to more electric vehicles in London is being driven by the Low Emission Zone. I wonder when this will roll out across Manchester? From what I experienced in London, I am a staunch supporter. 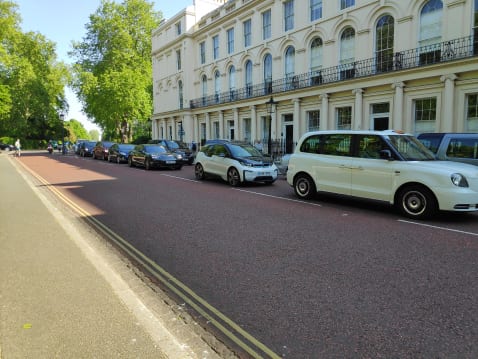 The venue for the conference had been changed from the British Library to The Royal College of Physicians. I had no idea what to expect and looked forward to see the building for the first time. It didn’t disappoint. After walking past the beautiful town houses that overlooked Regents Park, I was immediately ‘disrupted’ by an imposing “modernist masterpiece and one of London’s most important post-war buildings”. Wow – this piece of stark architecture, a grade 1 listed building, had been designed by Sir Denys Lasdun to make a statement. I knew it was to be a good day.”
Read more … 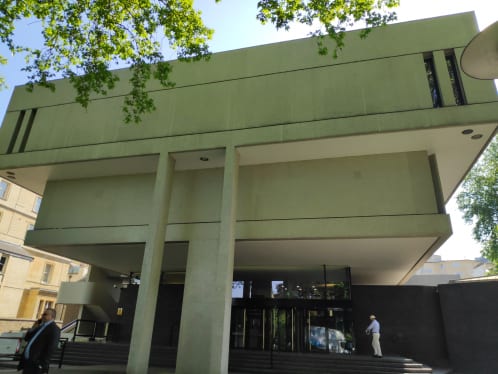 We’re blogging the day’s action from our Learning Environments Conference live, here, on Thursday 16 May 2019!

(If you have trouble viewing the page below please try this link.)

Nigel Oseland, Workplace Unlimited, and Colin Campbell, Saint-Gobain Ecophon, speaking at the Design & Management of Learning Environments 2018, on the early findings of their literature review on classroom noise and teacher personality.
[youtube https://www.youtube.com/watch?v=Xds2mq9EKMM&w=560&h=315]
Despite resistance to open plan classrooms in the UK, the movement towards innovative learning environments continues in parts of Europe, especially Scandinavia, Australia and New Zealand. Their definition (ILEs) is an ongoing discussion in itself and their success is dependent on many aspects. However, understanding the changes in pedagogic approaches, including aspects like the profile of teachers in this context and the quality of the acoustic design are key to informing the design process in order to deliver successful and sustainable learning outcomes.

In his introduction to our recent Workplace Trends Autumn Conference in London: People, Place, Performance, Nigel Oseland referred to the Workplace Zoo. Here’s his original blog post from back in 2012 – still as relevant today for the workplace and learning environments as it was then then.

I visited Colchester Zoo over the Christmas holidays and was really impressed with the quality of the animal enclosures. Clearly a lot of thought had gone into their design and a great deal of effort made in meeting the animals’ needs and making them comfortable. This was evident in the way the animals behaved and through the success of their breeding programme.
It got me wondering whether any lessons learned in zoo design are relevant to the workplace. However, I am not the first to make this comparison. Judith Heerwagen suggests “For insights, it is useful to look not at buildings, but at zoos. Zoo design has gone through a radical transformation in the past several decades. Cages have been replaced by natural habitats and geographic clustering of animals. And, as in nature, the animals have much greater control over their behaviour. They can be on view if they want, or out of sight. They forage, play, rest, mate, and act like normal animals”[1]. She continues “A key factor was concern over the animals’ psychological and social well-being. Zoos could keep animals alive, but they couldn’t make them flourish”. Heerwagen proposed that we learn from the new philosophy of enriched zoo enclosures, providing for well-being rather than simple survival, but can we also learn from the basic design principles in zoo enclosures?

Provision of a suitable environment is the most fundamental of five key principles in zoo practice – “the temperature, ventilation, lighting and noise levels of enclosures must be suitable for the comfort and well-being of the particular species of animal at all times”[2]. Painstaking effort and meticulous detail has been taken to ensure the enclosures at modern zoos provide each species and sub-species of animal with the best environment to allow them to “flourish”. In contrast, in the workplace, post occupancy evaluations (POEs) repeatedly show that satisfaction is low with temperature, ventilation and noise[3]. Although much effort is made to ensure that comfortable environments are provided in the workplace, POEs often show satisfaction with comfort is significantly below 50%. Individual preferences, behaviours and activities mean it is difficult to provide comfort for everyone, but such a, repeatedly, low level of satisfaction is neither acceptable nor considered good design. Similarly, when commuting into London last summer when temperatures on the Underground reached 40°C, as I stood sweating in a crowded carriage I often wondered to myself why it is illegal to transport livestock at temperatures above 35°C but not humans[4].
I am a fan of Maslow’s Hierarchy of Needs[5]; he proposed that for humans to perform to their maximum capability several categories of needs must be met in acceding order. The lower order needs refer to comfort and safety, the basics of zoo enclosures, and if these fundamental needs are not met then our performance is inhibited. In contrast, the higher order needs refer to more psychological, emotional and social factors. Interestingly, another core provision for animal enclosures is the opportunity to express most normal behaviour – “accommodation should take account of the natural habitat of the species and seek to meet the physiological and psychological needs of the animal”[2]. I have previously explored the psychological needs of humans in some detail and have also expressed my concern that they are not being met in modern homogenised workplaces[6]. It seems that a focus on space efficiency and reduced property costs override the individual needs required for maximum well-being and performance in the workplace.
It might be argued that zoo enclosure design is easier than workplace design as it accommodates a single species with a basic animalistic drive for survival. Firstly, humans have evolved into different races that have adapted to different climates, but nevertheless we are one species. Secondly, Richard Dawkins postulated in theSelfish Gene[7] that the single motivator for human behaviour is survival. So, on the one hand it could be counter-argued that both the design of zoo enclosures and workplaces comes down to a thorough understanding of the occupants’ needs and designing to meet them. Although we share the territorial and social behaviours of animals, these are often overlooked in the workplace. In addition, I believe that there are many other factors that drive how humans behave on a daily basis. We are a complicated species, separated from the animals by our intelligence and personality, as well as neo-cortex size and opposable thumbs. We know that specific personality traits, e.g. introvert versus extrovert and internal versus external, lead to certain behaviours and needs. In a zoo, if an animal exhibits a particular characteristic that requires a specific environmental adjustment for them to “flourish” then it is very likely that the zoo keeper would make the provision. However, this is not the case in the workplace; we provide a homogenous environment for a “single species” and there is little recognition of individual differences and the associated requirements to enhance comfort and performance.
Although Heerwagen beat me to the analogy between the workplace and zoo enclosures, I think I was the first to compare the modern workplace to chicken coups[8]. Battery-farm hens are accommodated in high density environments with poor daylight and ventilation. In contrast free-range hens have lots of space in which they can roam and explore, and have access to the outside with unlimited daylight and ventilation. Battery hens are sad unhealthy chickens with a short life-span, whereas free-range hens are happy, healthy, inquisitive and playful chickens that live around five times as long as a battery hen. In terms of productivity, there is a high yield of eggs per sqm for battery hens, but the quality of the eggs is poor and the demand and market value of them is low compared to free-range eggs which offer a higher return on investment. So I recommend free-range workplaces with high quality space which offers people achoice of environments where they can explore and socialise or alternatively seek privacy. I wonder if the original bürolandschaft office might be considered free-range whereas the modern open-plan office is more akin to a battery-farm?
So isn’t it about time that we follow the example of the modern zoo and design workplaces so that individuals (and businesses) flourish rather than simply survive?

From an original post by Nigel Oseland at the blog of Workplace Unlimited,
Photo by Waldemar Brandt on Unsplash

We’ll be live blogging our Learning Environments Conference on 17 May.
Bookmark this page, follow and tweet using #LearnEnvConf to take part!
(If you’re having trouble reading the blog below, please visit this alternative site.)